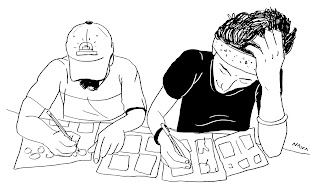 CAMINOS is an immersive paid fellowship empowering Austin-area Teens to carve their own path in the creative arts. For a period of 12 months Students engage with various elements in a program which includes working with ESB-MACC professionals on-site, 1-on-1 artist mentorships, assignments with community organizations and participation at relevant workshops and cultural events.  This process concludes with the execution of Student-led collaborative projects under the guidance of accomplished creative professionals. 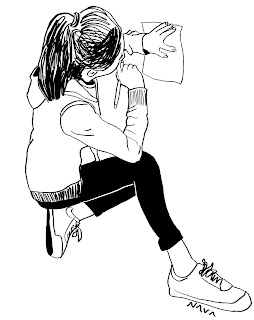 Our teens are passionate and curious about pursuing a career in the creative fields (fine arts, audiovisual arts, media, tech, etc) while also being ambassadors for Latinx social and cultural issues.  They are motivated to explore their growing potential as a vibrant members of our city’s arts landscape.

The CAMINOS 2017 generation worked on a collective publication featuring powerful women in their own lives, and fictionalized narratives inspired in true events.

The CAMINOS teens of 2018 have been collaborating with J Muzacs on a large scale mosaic that will be installed on the Hike and Bike trail in front of the ESB - MACC. They have also been working on a research-oriented digital magazine, writing articles pertaining to their individual passions.

Also, CAMINOS students have been working on a 16pg zine of their own design. Having visited the Zine library at the Austin Public Library for references, and having consulted Latin American comics recommended by NAVA, the teens work focuses  on issues surrounding inclusion, identity, family, tradition and belonging. Each zine is different, so in order to get to know these young artists, you will have to collect them all!

My name is Brandon Muñiz and I’m 16 years old. I am a Latino who loves art and more specifically make up.
In my community that is seen as a waste of time, yet I don’t listen to what people have to say. I am who I am.


Hello, my name is Ana Cristina Chavez Alvarado. I am 15 years old. I am the first child of two Mexican parents,
soon I will be the first to graduate from High School in my family and move on to my college career. I feel like I’m
an opened minded person and I am interested in just learning new things in general. I take advantage of every
opportunity that is given to me to learn new concepts and ideas. I decided to join the Caminos program because
my dream career is to become an Architect which I feel has a lot to do with creativity within the arts. Caminos has
helped me a lot to expand my idea/ definition I once had about art. I say the idea I once had because Caminos
helped me see that  art is a much more than just coloring or drawing, it is a complex and open content that can
open further opportunities for myself in the future as a Architect. From Caminos I’ve learned many lessons, and
most importantly, I’ve met professionals that I would not have been able to meet if I weren’t in the Caminos program.
Thanks to having met these professionals now I have their phone numbers in my contacts, I know that if I need a
favor I can just give them a call and see if they can help me. With this I’ve kept in mind the quote; “It’s not what
you know, but who you know.”

My name is Gabby Gonzalez, I’m 18 years old, and I’m a senior in high school. I’m very passionate about music, art, politics, and activism. With Caminos, I’ve enjoyed connecting more with my culture through what I’m most passionate about. I have also loved the experience of trying new creative things and learning something from everything we do in Caminos.


Hi my name is Natalie Hernandez. Im 17 and a senior in high school. I am passionate about social justice and education. I mentor at my school with at risk middle school girls. We work on leadership skills, anger management and character building.


Hello, my name is Natalia Dominguez, Im currently a senior and also going to be the first in my family to apply to college. Something that keeps me motivated is the people that need help. With Caminos, i have learned that in order to keep a community working together, then relationships need to be built. I enjoy being in the program because I like to try new things and also meet new people.


Hello, my name is Esmeralda Rodriguez ! In general I love volunteering at animal shelters and I enjoy spending time with my hamster. I also enjoy being an intern for the creative arts internship called Caminos at the Mexican American Cultural Center!


My name is Bianca Rojas, I’m 18 years old and I want to be a tattoo artist. I’ve always had a great interest in body art. I’ve been trying to find an apprenticeship to learn more about this art form since 1. There aren’t many females in this work industry and 2. Not many are latinas. I hope to one day have my own tattoo shop. I’ve also began to produce my own shirt designs. Screen printing has been a good way to show my work to others, shirts you wouldn’t find anywhere else. At Caminos I’ve learned about Comics, Mosaics and things have been going very good for me. I’m a very curious person and I love to learn different art forms I can get my hands on. I’m very proud of the things I’ve produced and I hope to begin selling my work soon. IG: lyn.artx


My name is Sammie Seamon, I am 17 years old, and I love being part of the Caminos program! I’m passionate about journalism and animation and hope to one day be a journalist and write about political and social issues in the U.S. and internationally. I’m an editor-in-chief of the Polaris Press, captain of my school’s cross country and track teams, and am currently working on a solo traditional animation for my senior thesis! I’m very grateful for the exposure Caminos has given me to new art forms and creative projects, and I’m super excited to showcase our zine at the Staple Expo!


My name is Abraham Hernandez, i'm 18 years old and i have a puppy husky named Luna. I like to watch Naruto and memes. I want to become a owner of my own business( business type to be announced). 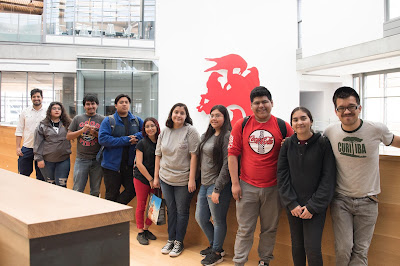 We look forward to participating in STAPLE, which will be the students first public presentation of their own forays into self-publishing!

NAVA is a mexican-american artist, cartoonist, photographer, Augmented Reality pioneer and editor of the international Latino Toons Collective. Since 2017, he has been working with the CAMINOS program teens in developing comics about their own experiences. His works have been published internationally and he has participated in individual exhibits in Mexico, as well as group exhibits in Colombia, Argentina, Brazil and the United States. In Austin, he has presented his collective's work at Nerd Nite and other venues. The group's travelling exhibition, is slated to arrive in Austin to the ESB-MACC main gallery in fall of 2019.


Jeremy Holt will be returning to Texas from Vermont for this years Staple! A talented writer, Jeremy's bibliography includes Skip to the End and Skinned (Insight Comics), Southern Dog (Action Lab)  Pulp (Comixology), which IGN has called, “…one of the best one-shot comics of the year,” and will be debuting After Hodini (Insight Comics) latter this year. Jeremy  was kind enough to take the time to do this interview.

Jeremy will be participating the the LGBTQIA Comics Panel at STAPLE! 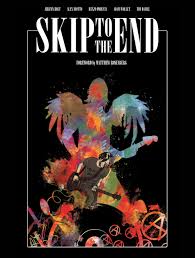 MH - In preparing for this interview, I got the chance to read Southern Dog and Skinned. I feel that each book plays around seeming.  Characters are not physically as they seem to appear. At the same time, they’re not emotional and/or ethical as they seem to project.  Is this something you see in your work, and if so why?

JH - That’s an interesting take on those two books. For me, it’s less about seeming and more about the exploration of one’s identity. For Skinned, I aimed to tackle the topic of gender identity, and for Southern Dog, more of a focus on ethnic identity. As an adopted, Korean-American, non-binary writer, I cannot help but incorporate my own experiences (both positive and negative) with identity into my stories.


MH - What titles are you bringing to Staple? 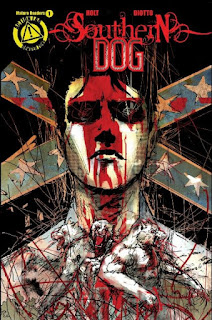 JH - I will have copies of Skip to the End, Skinned, and Southern Dog available for purchase. A little something for everyone!

MH - Your latest and upcoming books Skip to the End and After Houdini draw from historical figures that were also public performers. Do you see this as a creative shift for you? Is there a connection between appearance, performance, and writing?

JH - I’d definitely agree with that assessment. While developing, writing, and producing those books, I wanted to stretch my creative muscles by writing outside of my wheelhouse. Of the two books, Skip to the End was a massive departure from the types of stories that I tend to gravitates towards. Also, the fact that these both are works of historical-fiction, there was a considerable amount of research that needed to be done. I’m a stickler for details, and wanted to be sure to appease fans of either Nirvana or Harry Houdini, while also providing an accessible story for everyone. 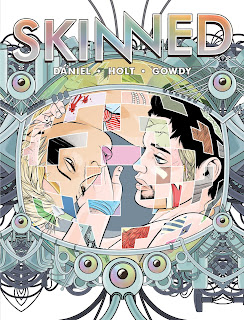 MH - A lot of Staple guest are creators themselves. Do you have any advice on how you balanced writing with a personal life, day job, and networking?

JH - Tough question! Mainly because what works for me may not work for someone else. However, I will say that you must love what you do. Before you ever show any of your work to a friend, collaborator, or hopefully an editor, the act of creating should feel more like a reflex than a conscious decision. That has provided the foundation I’ve needed to forge on and build up my imaginary worlds. As for balancing everything outside of that? Well, that’s the real challenge in my opinion. I believe having a separate space, like an office, to do the work greatly helps in disengaging from it when Life comes roaring back in around you, after hours upon hours of isolated writing time. I also prefer structure, so I definitely designate blocks of time for just writing, others for just admin stuff like emails, and sprinkling in social media networking when I have a free moment at my day job. 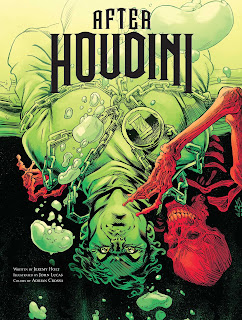 MH - Who are writers that influenced your storytelling?

JH - This list is ever changing, but currently my go-to inspirations are Patrick DeWitt, Haruki Murakami, Neal Shusterman, and Stephen King.

MH - Are there any other Guests or Exhibitors you are looking forward to hanging out with at Staple?

Posted by Unknown at 8:10 AM No comments: