An Interview with LUMBERJANES Writer Grace Ellis and Artist Brooke A. Allen

Grace Ellis is a writer most well-known for co-creating Lumberjanes and her work on the site Autostraddle. She is a proud native of wondrous Ohio and when she’s not coming up with amazing mix-tapes, she’s most likely enjoying nature and the great outdoors. http://ohheygrace.tumblr.com

Brooke Allen is a cartoonist/illustrator spending most days in DC with her best pup Dog Linus drawing Lumberjanes and doing covers and shorts for glorious things like Regular Show, Adventure Time, and Bravest Warriors. http://brookeallen.tumblr.com 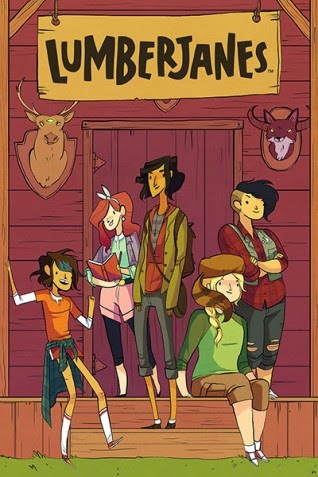 When it launched in 2014, Lumberjanes became an immediate hit for BOOM! Studios, and remains one of the publisher's bestselling original series. Lumberjanes was created by writers Grace Ellis and Shannon Watters, who then brought in artist Brooke A. Allen and co-writer Noelle Stevenson to round out the creative team. Allen, Ellis and Watters are guests at STAPLE! 2015.

Lumberjanes is a true all-ages title, with readers ranging from elementary school kids to adults. Is it a challenge to find the right tone—both in the writing and the art—to keep it accessible and engaging for such a broad audience?

Grace Ellis: I don't think so. I mean, from where I'm sitting, the only difference between all-ages media and media "for adults" is that you have to cut out the sex and violence and swearing, in most cases. (And honestly, that's a good writing technique anyway, since I can't tell you how many writing classes I took where people relied on so much on sex and violence to make their stories interesting that it actually became uninteresting; those things work best when they're used with a lot of intention. Anyway.) The most important thing for me is to tell a compelling story. Kids are smart. They'll keep up with you without you stooping to what you think their level is, and I think because Lumberjanes doesn't stoop at all, we were able to find an adult audience as well as a younger audience.

Another thing we're trying to do with Lumberjanes—since the world of the story is intentionally rooted in a world that not only shares our frame of pop culture but also references it like we do—is to make sure there's no penalty for not getting all the pop culture references. Like even if you've never seen Terminator, you know it's funny when someone says, "come with us if you want to not get eaten by a raptor." So I think for me, that's really the biggest challenge in writing this particular book, since it's all-ages: finding the line where something is funny to everyone but there's also almost a bonus joke if you're well-versed in pop culture.

Brooke A. Allen: For me, it's been a breeze because I work from the scripts so really the only censorship that happens on my end is to hold off on making things look too scary or too adult but rarely (if ever) have I been in a situation where I think, “Oh, maybe I drew that too gory.” I do remember one time in one of the first few issues ,when I was still grappling with how to draw the characters and render the surroundings, there's Mal and Molly's CPR smooch that I couldn't for the life of me figure out how to draw, and it was a combination of trying not to make it look sexy (because it's an innocent situation) and then just trying to figure out how their weird lil’ faces fit together. Style-wise, I think it was a bit of a struggle for me also to break away from naturally wanting to over-render things and in turn keep the characters more streamlined, which is a different kind of censorship, but visually I think it can be the difference between what's appealing to young readers and what's appealing to adults. So finding the right visual blend of easy readability, complexity, and humor that makes it approachable for any age group is the balancing act.

Were you surprised by the immediate and passionate fan response to Lumberjanes?

GE: Absolutely. I wasn't expecting many people to read it at all, but I'm delighted that people seem to dig it! Sometimes I have to work to convince myself that this isn't just Shannon playing an extremely elaborate prank on me. BUT IF IT TURNS OUT THAT IT IS: I knew it and I'm onto you, Watters.

BAA: Absolutely! I knew Noelle and Grace had fan bases and I hoped their fans would pick it up, but I certainly wasn't expecting the response it got. It was a little overwhelming, but in a good way! 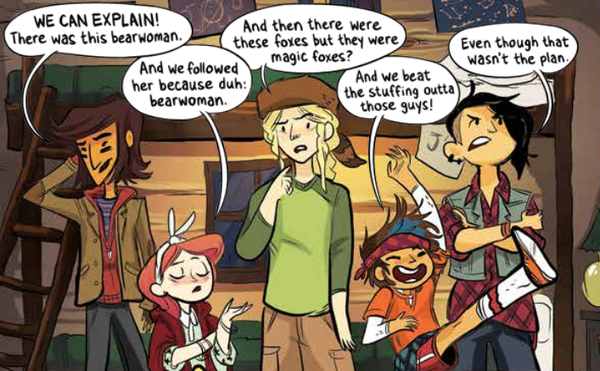 What are the biggest influences on your work?

GE: When I need to get psyched up to write Lumberjanes, I read a bunch of riot grrl zines or old school Girl Scout handbooks and listen to the Gravity Falls extended theme song on repeat while I text Shannon. But I think the biggest influence on the series hasn't been any one thing in particular, but the lack of things and the void this series is kind of constructed to fill. This series is a lot of wish fulfillment; we're lucky enough to be making exactly the series we would've wanted when we were kids, but there was never anything like it when we were growing up, definitely nothing with real live lesbian characters. So really, the biggest influence on Lumberjanes has been all the stories that we wish existed. And also ‘90s tomboy characters, that trope was influential too. And Taylor Swift! Just in general. As a human.

BAA: Cartoons and animation, especially the ones I grew up with like all of the old Cartoon Network and Nickelodeon toons, Disney movies, Don Bluth films like All Dogs Go to Heaven and The Secret of NIMH, Looney Tunes, Hanna-Barbera, if it was animated I loved it (except Spawn...anything but Spawn). Comics-wise, I draw a lot of inspiration from people like Chynna Clugston, Bastien Vives, Walt Kelly, Claire Wendling, and Christophe Blaine just to name a few (it's a long list). And nature. Nature is the best. 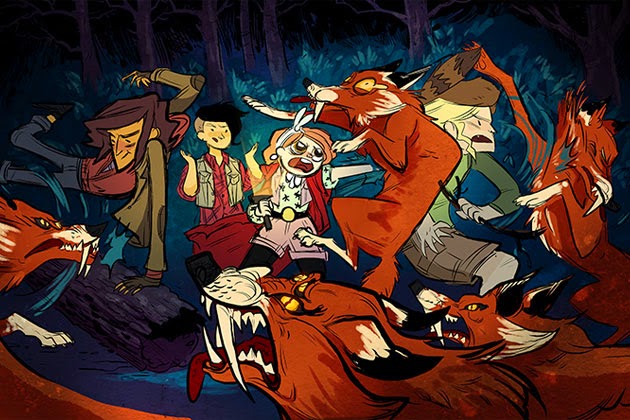 Lumberjanes originally was conceived as an eight-issue miniseries, but once it was clear the book was a hit, it was changed to being an ongoing series. What effect did that have on the structure of Lumberjanes' first story arc? Would the miniseries version have ended with the same revelations?

BAA: This is probably better answered by Grace, Noelle, and Shannon but I think the miniseries probably would have ended very much the same, maybe answering a few more questions, but overall pretty similar because I think the first arc was pretty much realized. And then we found out soon after the first issue that it would be ongoing and that gave the first arc a little more room to breathe, but I think key elements of it stayed the same.

GE: Someone put a bug in our ear really early in the process that it was possible that Lumberjanes would get picked up as an ongoing, so we started leaving tiny threads we could pull if we did get picked up and were able to expand the world a little more. So the first arc would've been approximately the same: it was designed to be really episodic and full of fun camp times and friendship before revealing there was a bigger mystery. But now that we have more time, we can worry about the even bigger mystery of what's actually going on at the camp in a broader sense. It's one thing to know that there's something cosmically strange about this place, but it's another to delve into why and how it's affected the camp in the past, present and future, you know? I'm really excited about it. There's a lot of really cool stuff in store.

If you could receive a Hardcore Comic Creator Type merit badge for a new skill you've mastered in the year since Lumberjanes launched, what would it be?

GE: I want the Patience Makes Perfect badge! It's tough being a writer because your work happens SO LONG before the finished product hits the shelves, so I've learned to contain my excitement until I can share it with everyone else.

BAA: I think earned a platinum Up All Night badge pretty early on... Hopefully this year I’ll get my Time Management badge too.

Aside from Lumberjanes, what other projects are you working on?

GE: I've got a bunch of other irons in the fire, but none of those projects have been announced yet. Not all of them are comics, but I think all of them complement Lumberjanes pretty well, actually. So, vague stuff to look forward to, eh?

BAA: Some short stories for BOOM!, some smaller projects for other companies, mostly  *~*~ secret things~*~*. I'm also working on some new toy designs. 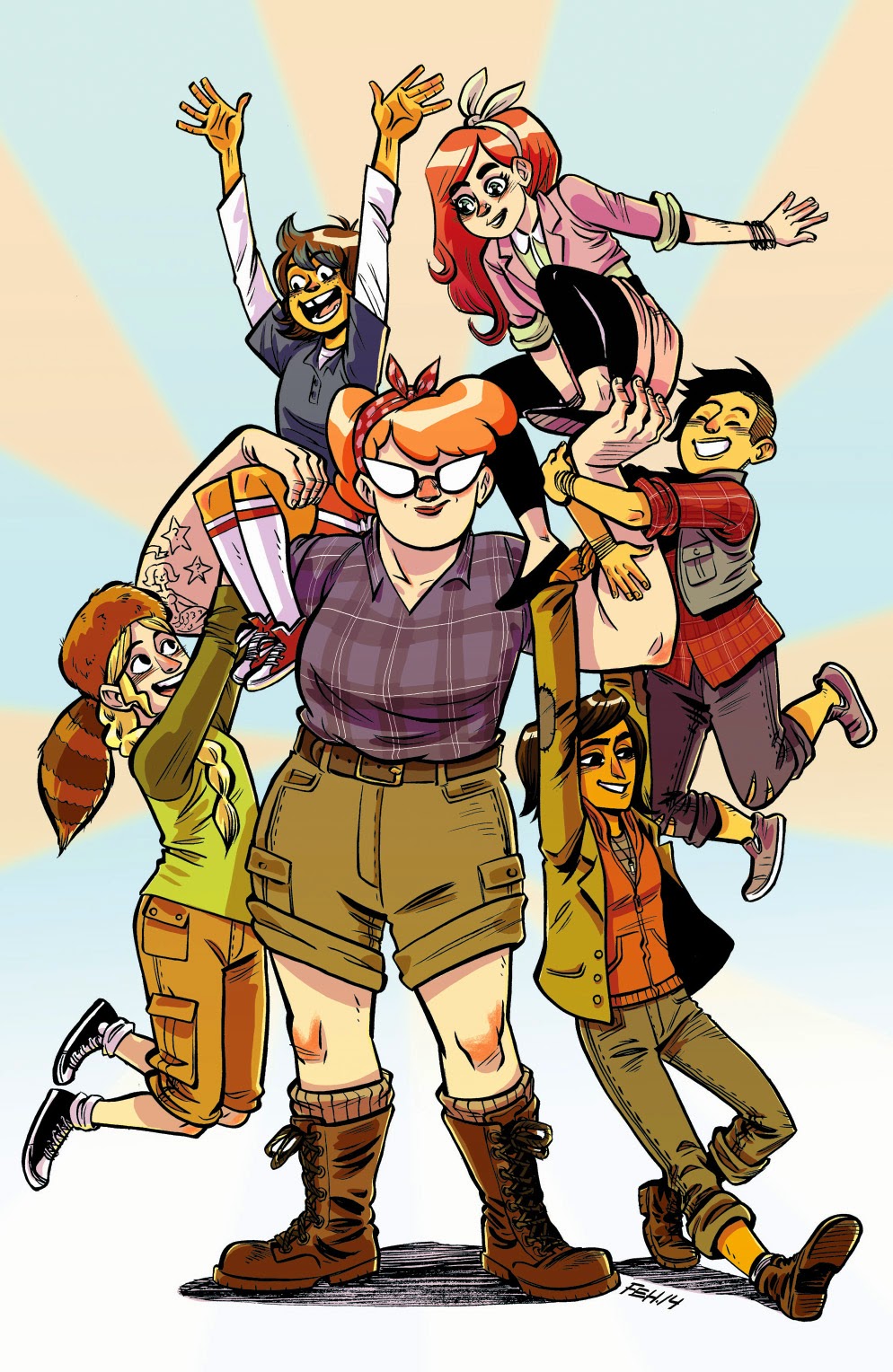 One last question: if it's really cold outside, does Camp Director Rosie change into long pants, or is she so hardcore that it's cargo shorts no matter what?

BAA: I'd have to check with Grace and Noelle for the official answer, but I'm pretty sure she'd wear shorts even in the vacuum of space. Although designing a hardcore lady type parka suit would be fun.

GE: This one is so tough! Hmm. Ok, I feel like she's a cargo shorts kind of gal, but when it gets unbearably cold, I bet she goes for some really nice, insulated snow overalls with some long underwear. But otherwise: cargo shorts for life.
Posted by Annie Bulloch at 7:38 PM