I've opened a discussion topic about table sharing on the STAPLE! Facebook page, located here.
Posted by Uncle Staple at 11:42 AM No comments:

Tables sold out in record time this year - I believe this is the first time ever they've all gone befroe Christmas! If your registration is received now that tables are sold out, you will be sent an email asking if you'd like it returned to you or have it put on the waiting list in case of a cancellation. Payments will not be deposited unless a table becomes available for you.

Thanks and best of luck!

Chris "Uncle Staple" Nicholas
Posted by Uncle Staple at 5:53 AM No comments:

Hey y'all! Tables for STAPLE! 2010 are now sold out! This is the earliest we've ever done it. If you wanted one but didn't get it we're really sorry - better luck next year! Any registrations received at this point will be added to the waiting list in case of cancellation.

Thanks everyone and best of luck!
Posted by Uncle Staple at 8:47 AM 1 comment:

Check it out on Geek Bombast!
Posted by Uncle Staple at 1:31 PM No comments: 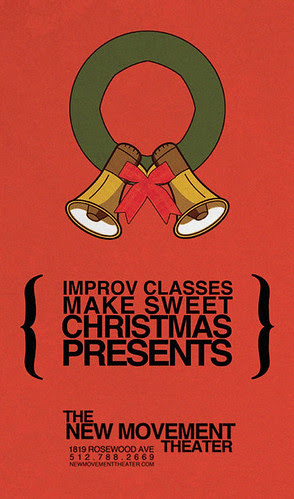 Staple friends and family!
Uncle Staple has been learning improv comedy at The New Movement (ask him about it!) and you can too. See below for our fancy holiday offerings...

GIVE THE GIFT OF IMPROV

There was this time when we got an improv class as a gift and it was a wonderful gift. It’s right up there with Super Mario Bros 2 (Aunt waited in line all night) and a spoiler for my high school Mustang (seriously). Give us a call and we’ll set you up all nice with a card and gift certificate for your new best friend.

Our teachers have years of professional experience…
…performing in the country’s most prestigious comedy festivals, running workshops at some of the country’s most well-known venues and training at comedy institutions in Chicago, New York, Los Angeles and beyond.

More information is this-a-way! (Mention Staple and we'll discount the mess out of your certificate)

We are very pleased and excited to announce that Andy Runton will be appearing at STAPLE! The Independent Media Expo!

Andy is the creator of the breakout all-ages series of graphic novels, Owly, published by Top Shelf, which features a kind little vegetarian owl who's always searching for new friends and adventure. Relying on a mixture of symbols, icons, and expressions to tell his silent stories, Runton's work showcases both his gift for characterization and his love of wildlife and the outdoors. His animated and heartwarming style has made him a favorite of both fans and critics alike. The Owly series has earned him multiple awards including the Howard E. Day Memorial Prize, the Harvey Award, two Ignatz Awards, and the 2006 Eisner Award for "Best Publication for a Younger Audience". He currently resides in the greater-Atlanta area, where he's working full-time on the next Owly graphic novel. For more on Andy's work visit: http://www.andyrunton.com/

Andy will be joining Guy Davis (BPRD, The Marquis) as a featured guest at STAPLE!

Our Exhibitor list has been updated! To see more of the great artists and creators that will be at the 2010 show check out the Exhibitor Page

Want to help promote the show? Go to http://www.staple-austin.org/promote/ to grab some handy buttons to add to your website.

Looking forward to seeing you the show!

Now available for download — the latest issue of string, the regular anthology of comics from 7000 BC.

Download a PDF of string #17 and check out future issues every month. This issue sees the continuation of Courtney and Jeff's Peoplings, Dale's The Dead Rez, Bram and Caleb's New West (see below to download previous issues), a new Otis story from Jamie, and a true story from Chuck's wife, illustrated by Danny.

(If the link for the PDF isn't opening the file up for you, it might work better to right or option-click and download it to your computer.)