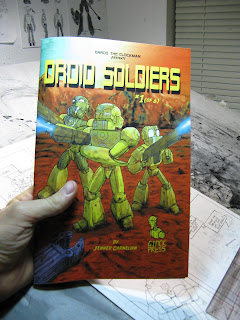 I tried to reply to a Newsarama post, but I think my reply turned out to be too long to be posted.  Since we in the Staple! community are all about independent creators and publishers, I figure this to be an appropriate place to repost it.   Also, copies of the first issue of my new mini-series Droid Soldiers ( pictured above ) is now at Austin Books in the local creator section!  Of course I'll have them and my other work available at Staple! this weekend.

The creator-owned revolution back in the early nineties had a pretty strong effect on me.  I was about 12 or 13 when I bought Spawn #1 on impulse from the stack of fresh copies sitting by the register as I was purchasing whatever it was I was collecting at the time.  Being out of touch with the industry, I was completely unaware that Image was being built until I read that first issue of Spawn and found out my then favorite Spider-man artist was the man responsible for it.  I think that was when I became aware of the difference between creator-owned and work-for-hire in comic books and the divide that seemed to exist between the two.

But, it was Spawn #10 that really made an impact on my creative world-view.  Written by Dave Sim and featuring a guest appearance of his character Cerebus The Aardvark, it introduced me to both.  The whole thing put my adolescent brain through a ringer as I tried to put the characteristically Dave Sim metaphor together with the continuity of the series.  In spite of that, the last page struck a particular chord: Spawn is owned by Todd; Cerebus is owned by Dave - forever.

I think any fantasies I had about drawing comics for Marvel ( except for Batman, I wasn't into DC back then ) pretty much evaporated, and the fantasies of creating my characters and telling my own stories dominated.  Like a lot of fanboys I'd already been doing it anyway, but this "revolution" that I could feel gave it a new meaning.  Ever since then I've had little interest in either the DCU or the MU ( though I've enjoyed most of the cinematic versions ).  In almost twenty years I've only bought Wolverine: Origin, Civil War and the Prelude collected, two Iron Man hardcovers, and the Live Wires mini series ( I like robots ).

Having said that, being a self-publishing indie-creator for the past few years now, and also having done a lot of commissions for people, I have come around to understanding the work-for-hire point of view.  When I'm trying to make some extra money, I'm there to provide value for whoever is willing to pay me for it.  If they're hiring me to design a character that they are going to own the "rights" to, I know well enough that once the work is done and the check has cleared I'm going to walk away from it ( and gladly so since maintaining a character is a lot of work ). I already have my own characters and my own world, and nobody writes or draws them but me ( though I'd be flattered if any indie artist/writer decided to make their own versions ).

That's not to say that I agree with the heavy handed rights enforcement I've been seeing from Disney/Marvel, but in a world where Intellectual Property and corporations are the norm ( both concepts I have little value in, seeing them create more conflict than benefit in society - personally, if we're going to have an IP system, I'd rather all creations go into the public domain once all the original creators are dead - at the latest ), a deal is still a deal.  Sure I find it saddening to see where some of these older creators are ending up, but risk is a part of life, and if I get the short end of the stick in a deal that I made, I have no expectations from Darth Vader that he's going to alter the deal in my favor.  It's my responsibility to keep my financial affairs in order so that I don't end up in the gutter like Edgar Allen Poe.

However, considering that the Big Two manage to sell millions of copies a month, with most top-selling indies not even coming close ( The Walking Dead excepted ), the concept of a Creator Owned Day is something I see value in as a way to help bring more attention to alternative works and creators that are out there. Personally, asside from the movies, I find the MU and the DCU mostly boring except as a source of occasional nostalgia.

Now, to those who are putting their money where their mouth is by providing financial help for those older creators they value, I commend you.  If we don't like the way giant corporations are treating past contributors to their fiefdoms, we should stop giving them our money and give it to those we feel deserve it.