Dan Price is the writer and co-creator of Masters of the Obvious he also created the Latex Avenger. Recently, he started a web strip called Excelsi-ish! You can find his work at www.mastersoftheobviouscomic.com and buy his stuff at the Hound Comics Store.


Was Latex Avenger your first Comic Book project?
It was the first thing I did that saw fruition. I did the first issue in 2007, but really got into it in 2010. 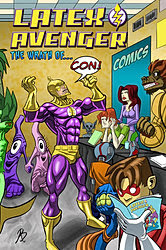 You met your collaborator Bonn Adame at a 24 hour comic day and you have been involved in the monthly sketch bomb. What would say role of community has been on your work? It's been huge! When I first got into this, I didn't know anyone or what I was doing. In 2010, when I really started making a go of Latex Avenger and doing shows, I met a lot of people in and out of Austin.  By 2011-12, it seemed like Austin's comic scene became a family of sorts. People getting together and talking turned into collaborations and new ideas.
Artist Alley is a strange sales environment, you selling work that is very personal while surround by dozens of other creators attempting to do the same. What have you found works and why?
The battle for an independent comic creator is that no one knows you or what you do, so you have to stand out. I have an elevator pitch for both Latex Avenger and Masters of the Obvious that I say to everyone who walks by (much to the chagrin of the people tabling next to me) and gauge their attention level. In the case of Latex Avenger:
"Latex Avenger and Spermicidal Foam Lad! Repelling crime 99.9% of the time!" 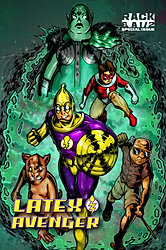 If they laugh, I hand them a comic and start blathering.
Do you have any production or distribution advise you learned from putting out Latex Avenger and Masters of the Obvious?
I lettered my first comic in Photoshop and then flattened the pages, causing my vector fonts to raster and never look right.  Don't do that.
How far ahead do you plan convention appearances and what do you do to get ready?
Depending on the show and the goals of that convention, prep can take a while, but it's not usually a grueling experience unless I have a book coming out for a certain show. When that is the case, I usually spend the week before watching UPS's tracking website like a hawk. Until the book arrives, it's four small heart attacks a day and constant anxiety.
What has been your best experience after taking Latex Avenger and Masters of the Obvious to conventions all over the state?

I am so passionate about the characters and stories I am creating, it's really exciting when you meet people who really get what it is I've been doing for the last 4 years and are just as passionate. Latex Avenger and Masters of the Obvious are not the typical fair seen at the shows and it takes a certain, special, beautiful person to gravitate to it. So, to those people, thank you for supporting the cause!