Houston based Mark Nasso is a comic maker and illustrator. He has been self-publishing and distributing his fantasy series The Land of Rats for 6 issues so far, and founded the Texas based horror anthology Doom Ranch 5000. Mark's amazing set up of comics and prints has been in artist alley across Texas. You can see more of Mark's work http://nassodesign.net, and http://www.theundergroundforest.com.

Land of the Rats is a part of a rich tradition of Swords and Sorcery tales. It resonates with luminaries like Robert R Howard and Wally Wood. Who were your main sources of inspiration?

In the late 80s I was heavily into the original Ninja Turtles comics along with every black and white mutant animal parody that followed. Of course, as a 12 year old all of my stories and drawings had mutant animals of some kind. 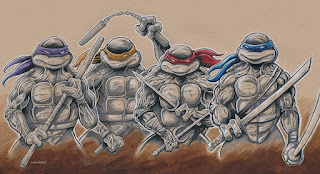 While not making comics, Dungeons & Dragons also had taken over my life which sparked the interest in the fantasy genre. Then during another phase I was reading a lot of world history and The Bible. I think all of this finally coalesced into Land of the Rats which is about a race of hybrid rat-humans in an otherworldly fantasy setting.

A few years later I was introduced to Dave Sim’s Cerebus and Joseph Michael Linsner’s Dawn which I think anyone will tell you are only Swords & Sorcery on the surface. Those guys are using that genre to explore many topics that you wouldn’t find in typical Swords & Sorcery comics.

Who in the comics industry do you see as contemporaries in the Swords and Sorcery genre?

I may not be the one to ask about what’s currently on the shelves. But once again, I was very inspired by Cerebus and Dawn. Anything Heavy Metal. I think Conan, Slaine, and Elfquest are no-brainers. I recently met Devin Kraft and am looking forward to seeing him at Staple. I need to either download or pick up a copy of his fantasy book, Dragon Slayer. 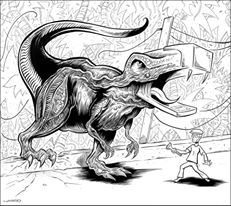 What are your thoughts on world building? How much time do you spend developing back-story and how much of grows out of the story in process?

It’s a little of both. Land of the Rats has five issues published with the sixth in the works. I have a history written that goes into detail about the cultures, wars, and other events that occurred before the main story arc. It’s by no means on a Tolkien level but I use it as reference to make sure what I’m writing works and doesn’t contradict a previous chapter. And, along the way, new stories emerge. The collected edition of Land of the Rats has four stories with the first chapter being the one that was created most recently. So as the story progresses you’re watching my art go backward in time. I’m always jumping around in the timeline fleshing out the world in prequels, sequels, etc. 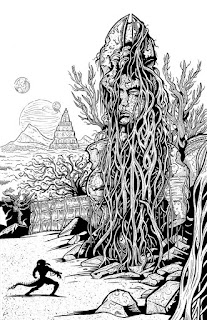 Also, the point-of-view in the stories is sort of first person and told from the rats’ point of view (specifically the rat, Jack Natari). The truth about much of the backstory is intentionally left ambiguous with Jack often wondering if he is being lied to or told the truth by other characters. Which is meant to reflect real life.

What is the process you use when laying out a page?

I don’t work from a Marvel Comics script format but I still arrange my panels and dialogue in the computer. On a sketchpad I do thumbnails and pin them up on the wall and then move them around to see what works. Obviously, you can’t lay out a page without thinking about how it fits into the greater composition.

What are the tools you use for illustrating?

I try to give all of the covers for Land of the Rats  a consistent look and the current five are painted traditionally with acrylic on canvas. The interior is done like most comics with ink on bristol board. I use a brush for most of my heavy lines and various markers and pens for the details.

Do you have any tips for tabling at conventions? 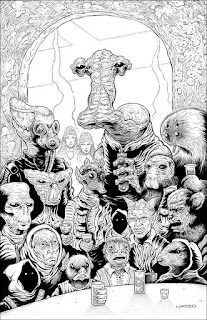 If you know any, please send them my way! I like to think about what convention I’m at and get into the mindset of what the promoters’ goals are and what the attendees are coming to see. If it’s a typical comic con I split my table down the middle with self published works on one side and fan art on the other. For cons like Staple I push the self-publishing front and center and try to debut a new book. For shows that are more artsy or for makers I try to make my space more of a shop or environment and less a dude behind a table staring at you. Everywhere I always try to make new friends or grab a new book or poster.

Your anthology, Doom Ranch 5,000, brought together a lot of talented Texas artist in a really interesting way. How did it come about, and have you ever considered a sequel?


The idea for Doom Ranch began back in 2011 when I was hanging out with a few friends at the Alamo. I suggested the idea for a book about Texas history and supernatural legends and kept talking about it so much that my friends held me to it until it was printed and a real thing.

The idea had two parts: the first was that I really wanted to do a Texas-themed project since I love our state and am really into our history. I wanted to do something that would turn the heads of people that aren’t from here and present to them legends that they may not be familiar with. The second goal was to promote local illustrators and show off our talent. And since I’m an introverted artist and a one-man show this was an effort to collaborate with other creators for once. So the plan really worked. The book sells well at conventions and increases awareness about Texas culture and other artists in the community. It also sends traffic to my friends tables so you could say it’s a convention within a convention!

As for a second volume? It’s been talked about and I actually have a few interested artists. I’m still working on promoting the first volume and working on a direction for the second volume that will be fresh and interesting!

Are there other exhibitors your looking forward to hanging out with a Staple? 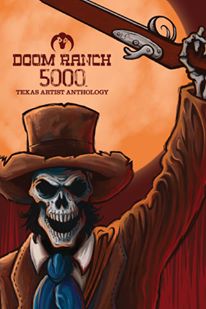 There are always the usual suspects and friends that you see at every Staple. I don’t want to leave anyone out but some names that we’ve seen previously that have a unique quality to their art and table design are J. Michael Stovall, Chris Ruggia, and Chris Sweet. I’m interested in people that approach things differently from how I would do them. Guys like Robert Stikmanz and Bram Meehan are always positive and supportive of other artists. I hear Mark Nasso is pretty cool.
Posted by Unknown at 10:06 AM No comments: