At the time of this interview Jon David and Nicole Guerra were completing their fourth issue of Nightmare of Professional Wrestling and had released a black and white ashcan of Ghost King.  The Nightmare of Professional Wrestling web comic is on-line at nightmareprowrestling.com.  The books along with the Ghost King Preview are available for sale at the site's shop.  You can also follow him on twitter @jondavidguerra and should like the NightmareProWrestling Facebook page.

As a couple what is the division of labor on these books? 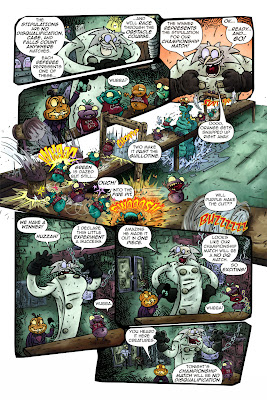 Usually bounce ideas off each other during the writing process. We talk about dialog and make sure it works well with what we want to convey to the reader. I also like for Nicole to look over the page and make sure every thing makes sense with the story and art.

As indie comic book creators why did you settle on an all-ages story?
We wanted to create something that anybody could get into and enjoy together.  Our ideal setting is parents reading NPW to their kids and both really enjoying the comics.
Do you think all-age books are under represented in the mainstream, on-line or at conventions?
I think a lot of times mainstream books do tend to take themselves too seriously and market all ages books as just kids books. Online and at conventions seems to be better places to find them as you're able to find more and more independent creators that want to do all ages books.
You use very stylized caricatures not just in Nightmares of Professional Wrestling and Ghost King but also in your poster work.   Whose work would you say influences you caricatures.
A french artist by the name of Fabien Mense has really been influencing a lot of my work lately. He has an interesting take on caricatures. I would also say Bill Wray and a lot of Ren and Stimpy, and Looney tunes cartoons. 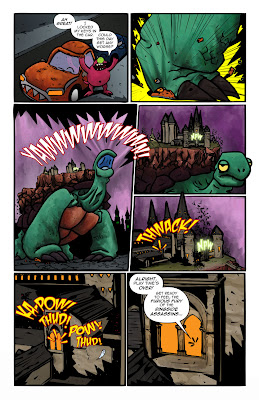 It seemed like hyperrealism or New Yorker minimalism dominated a lot of American comics when I was a kid.  How much has the success of anime and 3D animated kids films affected the appreciation of more diverse styles of cartooning?   How much has it affected your work?
I've been into anime since I was kid. That has definitely influenced a lot of the way I do action in my comics as well as some of the comedy. I would say I'm actually influenced by 2D classic Chuck Jones cartoons rather than any 3D animated films. The cartoons comedic beats and character acting has definitely influenced those same things in my comics.

Am I correct that you are working exclusively digitally?  What are the strengths of working digitally, like having back-ups of every stage of your work?  What are the drawbacks, like not having original art to sale?
Yes, I now work completely digitally. I find it a lot more freeing. Not so much for having back ups but more for being able to control your work a little more. For example, if the characters head is to small or too large I can adjust the size to the way I want it. Not having original art to sell is one big draw back. I've had a few people ask for original pages but I didn't have any. Another would be problems with the technology you're using. I used to work from a lap top that would crash every now and then. I've had to start a complete page almost from scratch, in the early days of the comic. 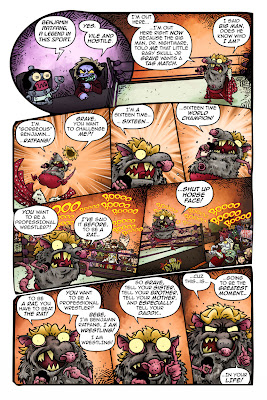 In sitting down and writing this I pulled up the archive page of Nightmares of Professional Wrestling on a non-portable devices.  I was surprised how much storytelling was conveyed in the inch tall thumbnails.  How do you keep clean narrative flow in your layouts?
Cool! I'm glad to hear you say that. I try to make it so you would be able to understand what happens in the comic even if it didn't have any dialog. Like I said early, my wife and I examine the page and make sure every thing is readable with the images and enhanced with the dialog.

The Ghost King ashcan from Staple! 2013 got me hooked.  What is next for Casey and the crew?
I'm glad you like it! I'm planning on doing thirteen issues of the mini-comic to coincide with his thirteen ghosts. At the moment that been put on pause for a little bit as things move forward with Nightmare Pro Wrestling being the main focus of what I do.

What really attracted me to Nightmares of Professional Wrestling was the amount of motion in your layouts and the energy through the continuity.  That and your dynamic panel shapes remind me of pre-war Jack Kirby.  Who has influenced your action sequences? 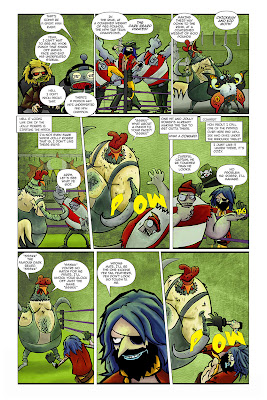 A lot of the action is inspired by the creative team known as Catfish deluxe. They include Fabien Mense, who I mentioned early, Bill Otomo, and Gobi. Anime has also played a big part in my action sequences too. As for the dynamic panel shapes and layouts, my biggest influence is an indie artist called Jerzy Drozd. Who always pushed cartoonist to use panels and layouts as part of telling the story in the comic.
Finally, besides the tale of the spunky team of Grave and Lobo, there is a playful x-factor to Nightmares of Professional Wrestling.  Some of my favorites are the great Dr. Nightmare’s Referee race scene in issue four; the Luna sup-plot in issue two; and the Nightmare Tortoise itself.   Are there any deployments that we should be keeping and eye out for?
Funny you mention the Luna sub plot.We've actually gotten rid of that! It pulled the focus away from the story we wanted to tell. It was available in the first few copies of Issue two but now is only available through the collected edition as bonus material. Recent issues have been reworked so it reads fine without it. It was also up on the website for a while but has since been updated. 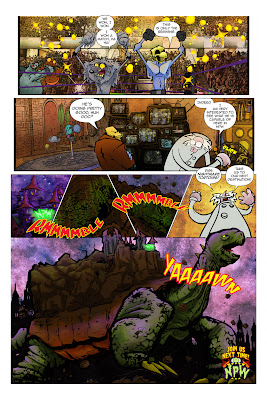 We will find out where the NPW Referees come from. I'm even planning on doing a short story from their perspective.


The Nightmare Tortoise will eventually be mapped. I want to include a detailed drawing/map of what is on the tortoise and where everything is located. I'm planning on putting that in future collected editions.


I have big things planned for NPW's future. Right now I'm in what I like to call "Phase 2" of the comic and it's ideas. Some big characters will switch sides and others who aren't used to losing will lose, big time. There is also a BIG thing happening for Nightmare Pro Wrestling that I can't reveal quite yet. Be on the look out for some major announcements soon.
Posted by Unknown at 1:01 PM