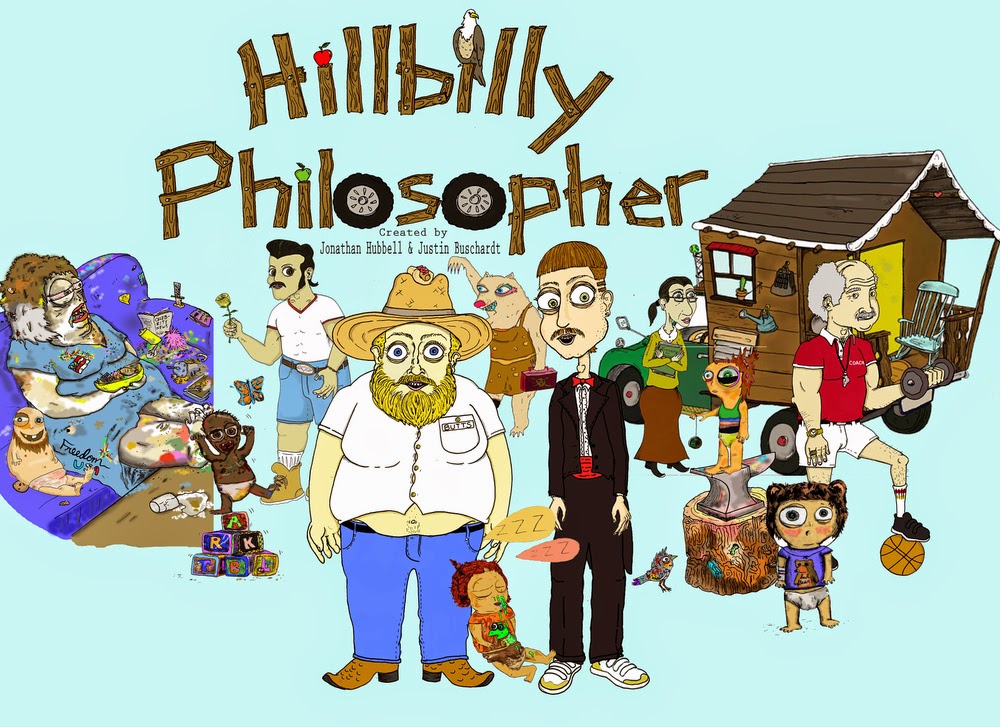 The Hillbilly Philosopher is an independently produced animated short, written and illustrated by Justin Buschardt and Jonathan Hubbell, animated by Tad Catalano, narrated by Danu Uribe, and made entirely in Austin, Texas. The pilot episode, completed in September of 2014, will be screened on Sunday, March 8 at STAPLE! followed by a Q and A session with the creators.

What follows below (after the trailer) is an in depth write-up by their friend Michele Cummins, and then the rather lengthy and bizarre bios they sent me instead of something normal like normal people would do. Weirdos.

Full disclosure: I am good friends with Jonathan, know Justin less well but like him just fine, and have never met Tad. I have a very small but I daresay pivotal voice role in the film.

Watch the official trailer  below and then come see the whole thing at STAPLE!


"All comic novels that are any good must be about matters of life and death."
- a note from Flannery O'Conner in the opening of her novel "Wise Blood"


One terribly dark night in 2002 (the year of the horse) Jonathan Hubbell found himself where no man (or even horse) should ever be - on a bridged section of a railroad track hearing none other than the burgeoning roar of an oncoming train.


He didn't die. But reflecting on that experience, Hubbell decided a good cartoon scenario could start with a character on those railroad tracks. But this character never before had a reason to think too deeply about anything due to his small-town surroundings. The character would suddenly be forced to confront the possibility of his own death, making him more acutely aware of his existence and allowing him to cultivate an overwhelming desire to understand life.


That is the premise of the Hillbilly Philosopher cartoon. Floyd, a small-town southern hillbilly stereotype, has a near-death experience, and after he must confront his existential thoughts and questions. He goes through a coming-of-age journey, but consider age replaced by intellectual maturity.


In the first episode, we find Floyd having a nervous breakdown on a railroad track because he sees two men kissing for the first time in his life. The amorous act shakes up his entire insular worldview. He soon, however, recognizes the reason the ground under him is literally shaking is that an oncoming train is close behind him.


After the collision of these two events, Floyd's escape from death becomes his launching point for character development. We watch Floyd continue to confront new people and situations as his journey progresses. The story is about transcendence of race, sexuality, differences, and a multitude of social issues. He grows and learns while we get to laugh at him because we've already figured out how to transcend all that stuff, right?!

Floyd's questions (Kantian questions) are confounding enough that he leaves his hometown to travel across the globe in search of answers. He embarks on this journey with his best friend Butts. "I mean you gotta have two stupid dudes," Hubbell assures me. "It's the formula. Butts… he's the sweetie. He's a big dude and he's also a kindergarten art teacher." The characters may start out ignorant but they are multi-layered and strive to become better people, which makes them both relatable and lovable.

Jonathan Hubbell and his writing partner Justin Buschardt have now logged somewhere around five years flinging their pencils, souls, and bodily fluids (blood, sweat, & tears, that is) into the production of Hillbilly Philosopher. The final component to their current team is animator Tad Catalano of Mighty Coconut, who was hired two years ago (after a successful Kickstarter campaign - ed.). ﻿﻿﻿﻿
"We had to get Tad drunk to work with us." Hubbell explains. "Tad's skill level is just so high that it was better when he was drunk because Hillbilly Philosopher is meant to have a simplicity to it." There have been voice-acting contributions from talented friends as well and Hubbell is slowly expanding the team as the project grows.


Now that the cartoon is finally ready for the world, Hubbell stays busy sharing the pilot with networks and other such avenues to see where it can land a future as a regular series. There are open screening parties in the works for this Spring around the Austin area and a few outside, including one at the Original House of Blues in New Orleans on May 21st.
And now the bios!

Justin Buschardt – Co-Creator of Hillbilly Philosopher
Birthed through “unknown” means via the tire of a double-wide trailer, his uncle blankly watched as he chewed his way through the hot, semi-malleable rubber until Justin’s beautiful tarred face emerged victoriously into the scorching desert life.
A swan then swooped down with transcendence to snip Justin’s umbilical chord, nearly killing his tiny body (along with tiny penis) in the gesture.  The graceful bird was shot almost immediately by the nearby uncle’s 20 gauge coach gun & the two relatives—one recently brought to planet’s existence—ate pieces of the elegant glider for “dinner.”
Justin’s portion was put in a blender, of course, so as to make it bottle-friendly and more digestible to his new baby belly.
27 years later, Justin Buschardt was found in Texas “celebrating America” by lavishly firing-off gluten-free pepper-spray in a county courthouse restroom.
Upon his forcible (yet homoerotic, at times) escorting from the institution—by men desperate for the perceived social structure of their authority—and out to the streets, Justin’s overalls then “lost they main buttons” (according to his statement), thus quickly & publicly collapsing his already-undignified trousers down to his bare feet.  This left only the tips of his tropically painted toenails protruding from beneath the crumpled denim bottom-wear he mama had bought him.
During this time, an animal-rights parade was stampeding violently down the road—crushing small-businesses and emergency clinics—in front of both Justin and his accompanying police officers as several previously-hidden fish flapped berserk-style haplessly to ground from Justin’s ill-kempt pantalones, flailing wildly on the sidewalk.
The fish were shot excessively to death using violent force by nearby officers on duty and even some of the animal-rights activists and one priest who admits to being high.  This seems to have occurred both out of confusion and, as of late, the public statement by Texas law enforcement representatives has simply been that the act was warranted granting the specific manner of “non-free speech” gesturing exhibited that afternoon by the land-trapped sea life.  The particular clauses utilized as legal leverage in this case have only been alluded to as part of a soon-to-be “law rule” in south Texas and thus remain shrouded from the public’s total knowledge until a future election year, if then.


Jonathan Hubbell – Co-Creator of Hillbilly Philosopher
Found in a swamp during the Reagan years by Ronald Reagan on a routine presidential swamp stay and getaway, Jonathan was fished out of the murky depths with a .22 caliber rifle and petrified-wood cane.
His body covered in barnacles and several colonies of shrimp (even his special bathing-suit region), experts later determined that it was these very shrimp that had kept him somehow “alive” all of his years spent submerged—though, there’s really no time to get into all of that now.
Jonathan was used as an example of “Trickle-Down” economics by universities for years following the incident until it was widely acknowledged that this made no sense.  At such point, Hubbell was sent on donkey (using government funding) to work at an auto shop outside of Abilene.
He became quick friends with Buschardt—who had been working there at the time as a “person to keep quiet, often”—but their friendship solidified one evening when Justin observed Jonathan spraying his donkey in the face with gluten-free pepper-spray to settle an argument that had apparently been festering for months.
Tad Catalano – Blind Animator of Hillbilly Philosopher
“On those cold, moonless nights, you will hear his sorrowful wailings before you notice the mystical melodies he creates with his flutes,” Justin Buschardt relayed to Jonathan Hubbell one evening at the auto shop, after hours.
At the time, Justin was sleeping in a rusty bunk bed with Jonathan and the idea that the two should make an animated short (that would one day, hopefully, lead to an animated series) had just begun to poke its seedling out of the soil, as the French say.  However, after several attempts to “animate” the story on their own, using pieces of foil, drills and antiquated figurines they’d find at pawn shops in west Texas, Justin began rambling about a man he’d heard about named Tad Catalano—a man who could possibly bring their dreams into reality without any of said supplies.
“But, he’s blind?” Jonathan inquired during twilight after Justin dismissively uttered this fact somewhere midway through a string of 1,000 other facts, as though it were irrelevant.  Justin replied, “Yes, he is the first blind animator in history—or will be—but I think it would be smart to work with him. “  There was a pause:  “I mean, anybody can do anything, right?” Justin asked.  Jonathan replied, “No, probably not.  In fact, not at all:  quite clearly.  However, something deeply irrational inside of my brain-heart knows how you mean when you say what you’re expressing this to me when you’re saying that how you did that just a recent ago.”  Hubbell continued:  “We have no choice then but to discover the first blind animator in history and we will fucking work with him.  It will be our mission.  It’s what God would’ve wanted.”
During the course of accommodating Tad’s disability—which had stunningly little to do with gluten (to Jonathan’s surprise and Justin’s disappointment)—both a friendship and newfound respect for our disabled human came to fruition.  Since Tad was unable to see the images to which he was applying motion, much of production involved his “caning” the two creators on their backs (and sometimes in the face or mouth) with his exotic wooden flutes, as he screamed wildly at them: “figure out how to make your ‘Looney Looney Mahoney Tunes’ move, and fast!!”
The motivation was needed.
Somewhere in between (1) grappling to understand the confusing, abusive, artistic (?) process, (2) searching around Tad’s house and yard at his behest for his “lost medication,” and (3) driving the “animator” to Taco Bell, Hillbilly Philosopher was completed, already making its mark as the best art ever created (in history and future).

Danu Uribe is an Emmy-nominated, on-camera and voice-over talent with fifteen years of stage, screen and studio experience in radio, video games, television, film, theater, animation, and eLearning projects. She takes pride in having created more than a hundred unique characters for educational software curricula used by students all over the United States in addition to performing around the world (from CONAN to Broadway) in The Intergalactic Nemesis Trilogy. In her spare time, she performs improvisational and sketch comedy at The New Movement Theater in Austin, Texas. Discover Danu at www.DanuUribe.com.
Posted by Uncle Staple at 12:00 AM