An Interview with Jess Fink, illustrator and creator of CHESTER 5000, WE CAN FIX IT, and just all kinds of online stuff (like KID WITH EXPERIENCE)

Jess Fink wears many hats: illustrator, cartoonist, designer of many a Threadless t-shirt, and more. She's been drawing since she was a kid and earned her degree in Illustration and Cartooning from the School of Visual Arts. Jess has produced female-friendly erotic comics like Chester 5000, a sci-fi autobiography in We Can Fix It, and has many an online offering to be enjoyed from her Tumblr (which we should perhaps mention is NSFW). Alan Moore described her work as "liquid and elegantly stylized." In advance of her STAPLE! appearance, she kindly took time to tell us a little more about herself and her work.

Both erotica and biography are among the less-traveled paths in comicdom, or perhaps just less-discussed in between the Batmans and Walking Deads. What led you to those paths?

I suppose it's because I didn't come from a super hero/marvel/DC comics background. As a kid I was heavily influenced by animation, especially Looney Tunes, I wanted to watch every cartoon. I'd wanted to be an animator since I was 7. The first comic I bought was The Maxx, after seeing it on MTV, and I adored it. I didn't know comics could be like that! After that I dove in and read any indie comic that appealed to me. I also got heavily into manga and anime. In college I read tons of auto bio comics by artists like Julie Duchet, Craig Thompson, Chester Brown, Lynda Barry. It blew my mind to think I could talk about my own life in my comics. As for making erotica, I think it was a thing I always drew and as I got older I just became less ashamed of it. Live action porn had always left me with a bad taste in my mouth and I preferred to make my own. I had a great teacher, Tom Hart, who introduced me to some fantastic erotic comics by Molly Kiely that told stories and were compassionate, funny and sexy. I also found out about Fantagraphics' Eros imprint, and I jumped on submitting things to them right away.

How important is the internet to your livelihood?

Science fiction tropes from robots to time travel weave through your work. Simply springboards or does science fiction hold any special meaning for you?

I love Science Fiction, I always have. The kind of sci fi I love is usually more focused on talking about what it means to be human, rather than on the awe of new technology though. I guess it's the same with erotica, I want more of this type of sci fi so I try to make it. 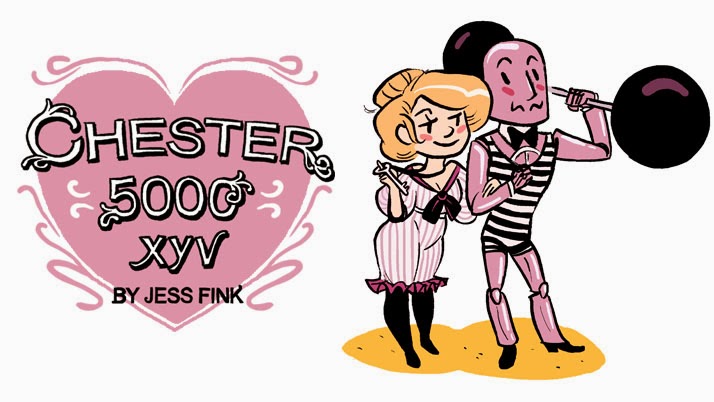 How do you strike a balance between humor and drama in your work?

It's super important to me that things be funny. It's always easier for me to believe stories that have humor in them because I think it's just a natural impulse.

The square page format pervades your sequential work, from the formatting of Chester 5000 and We Can Fix It to your autobiographical one-pagers. What led you to that format?

Actually, not all of my work is square! For Chester it felt better to use a square format so I could really fit all the swirling art nouveau panels in and not overwork myself on each page. Recently I've been doing quick auto bio comics in a square just because it's faster and looser. We Can Fix It doesn't have a square format though, and neither do a lot of my older auto bio comics. My comics for the Smut Peddler anthologies have all been standard sizes as well. 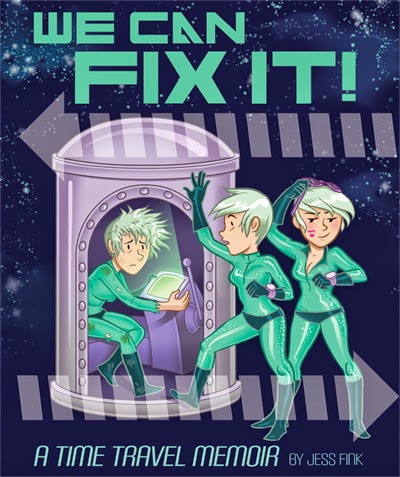 Email ThisBlogThis!Share to TwitterShare to FacebookShare to Pinterest
Labels: Chester 5000, Comics, Jess Fink, Kid With Experience, Nerd Disses: A Significant Quantity of Disrespect, Smut Peddler 2013, Staple 2015, We Are Become Pals, We Can Fix It, Web Comics