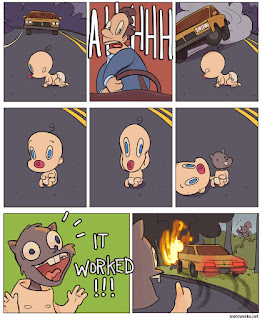 Dave Mercier, author of Mercworks (mercworks.net) and Staple! 2016 special guest, took time to answers a few of my questions about webcomics, conventions, hilarity, and the inevitability of death. Currently, he is updating his webcomic every Monday at Webtoon and can be stalked followed on facebook.com/mercworks.net, or Twitter @MercWorks

MH: Do you find the certainty of death and failure hilarious (like Lucy yanking the football away), or do you find yourself giggling as you stare hopelessly into the dark abyss?

DM: I've learned to embrace the abyss. Death and failure are symptoms of the human condition we all share, so I like to shine a light on that; to take it out of the darkness. It's relatable. Like laughing at a funeral! 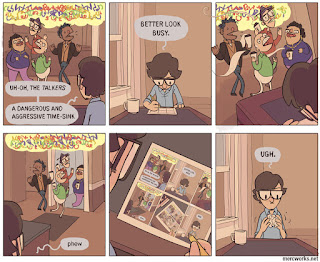 MH: What do you think the funniest word is?

DM: Pissdick. It's a compound word. Like the word bumblebee, but funny.

MH: Has anyone ever cosplayed as one of your characters?

DM: No, though I've often been accused of being one of the characters myself. There's a Youtube channel or something called Rhett and Link and they look exactly like Dave and Dana. I don't know who came first but if someone has cosplayed as those guys I could totally co-opt that. 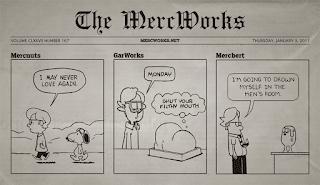 MH: What do you think the greatest strength web comics have over newspaper syndication or other print media?

DM: There's nobody to tell you what to do in webcomics. I can swear. A shitload! I can build the audience that I want, rather than hoping that whoever happens to be reading a newspaper gets my sense of humor. When you're publishing yourself you can build your own business out of it; I'm not answering to anybody but myself. Plus anybody can do it. Pick up an eighty dollar tablet, make a comic, put it on the internet. If people like it they're gonna share it. I guess freedom is the key word there.

MH: How do you mange being your own boss/task master?

DM: I gave myself schizophrenia for this. I have the part of me that is the worker bee, the part of me that's the boss. The worker bee can be a little rebellious sometimes while the boss has a tendency to put him in his place. Then you've got the miserable cafeteria worker, the bland business manager, the shipping operations crew, the janitor who loves shit. The boss can be a little tough on people sometimes so I have to remind him to chill out.

MH: Since the majority of your creative output is available free and on-line, what are your biggest success in marketing and funding your work? And how do you think this alters the way you table at comic conventions compared to artists whose work is mostly not available on-line?

DM: I'm trying to be a better marketer but generally I rely on shares and likes and people appreciating my work enough to show it to their friends. So I tend to think of the free stuff I'm publishing online as my marketing. All the comics are basically just ads for the books and prints and stuff that I sell. So it's the same except my online marketing is simply giving the content away for free and trusting that if people like what I make they'll buy it. 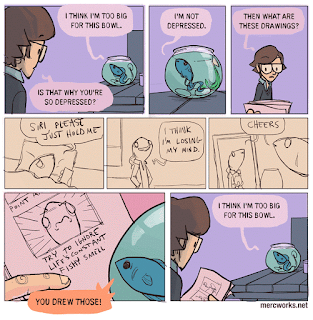 MH: Are there other exhibitors your looking forward to hanging out with a Staple?

DM: All of them! I love meeting new creators. I'm looking forward to making new friends and, if crossed, new enemies.

Thanks, Dave, for answering my questions! Looking forward to seeing Dave at Staple! in Austin, March 2016. He will have his new successfully Kickstarted book The Cure for the Human Condition and more!

Your web design company should be ready to submit a proposal for your website project along with a contract. Beware of companies who don't give you a formal contract.
see more details:Providence web design