As has become something of a tradition, it looks like lots of brand new comics will be seen for the first time at this year's STAPLE! Fred's new book Comic Book Comics, and some new stuff from the folks at 7000 BC (see below) and tons of other stuff, I'm sure.

Not to be left out, I will also have a new book making it's first public appearance at the show. Inspired by a true story, its a supernatural black-comedy entitled That Damned Cat which Dave Lamplugh and I have been working on for the last few months. Here's a preview panel: 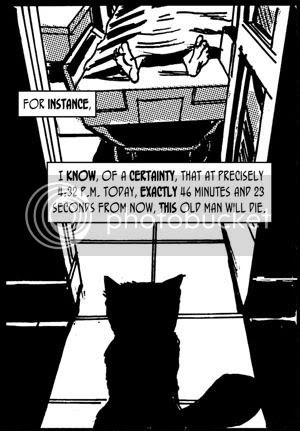 Dave will have a limited amount of TDC Issue #1 at his table at STAPLE! for a special convention price, along with some freshly hand made volumes of our previous effort, a 200+ page noir/thriller graphic novel called You Chose Right The First Time, so be sure to stop by. Hey, what's the use of doing a comic book show if you can't pimp your own books?

Anyone else bringing some new stuff this year?
Posted by Chris at 3:21 AM